COMMENTARY
The stock market outlook remains in a downtrend; no change in the ADX or Elliott Wave. The price/volume indicator switched to an uptrend. Yes, you read that correctly; an uptrend!

The S&P500 ($SPX) is well below it’s moving averages (~19 and 21% below the 50 and 200 day, respectively). Since those gaps are significant, neither indicator will be helpful in determining the near-term outlook.

Prices also retreated from the current downward trendline, but may have found support for a new uptrend at the 2450 level.  One of those trendlines will be violated soon, as both are really steep and daily price moves are still big.

The ADX directional indicators show a weakening trend, but it’s not done just yet.  On Thursday, we saw a follow-through day in the SPX. Before you get your hopes up, remember that severe market corrections like this one aren’t kind to the first rally attempt; most fail.

According to most Elliott wave counts, the SPX is experiencing a short-term rally in a longer-term downtrend; meaning 2191 isn’t the bottom.  That said, we could rally to 2934 before heading back down!

If we look at the weekly chart, we can see that prices met resistance at the Feb 2016- Dec 2018 trendline for the past two weeks. 2 points for the bear market. 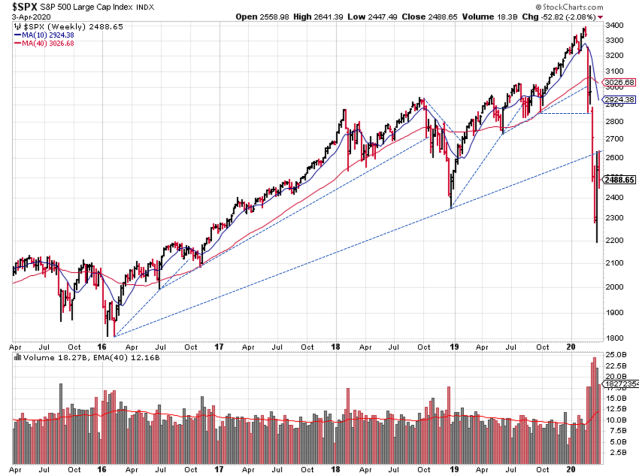 The big move last week occurred in commodities, with oil price surging 32% on news that the U.S. was trying to coordinate a global effort to reduce output and stabilize prices. That action doesn’t really jive with “free market” principles…but “misery (along with politics) acquaints a man with strange bedfellows”.

~10 million Americans filed for unemployment benefits in the last two weeks and they are just the ones that were able file. Many people are still trying to access there state’s websites or call centers.

Q1 earnings reports are starting to trickle in as well; expect results to be a mixed bag. The first half of the quarter was “only” impacted by a shut-down in China, so some firms were still doing okay.  Things hit the fan, so to speak, in the back half of Q1.

Stay safe, stay home as much as you can, and best to your week!