COMMENTARY
The stock market outlook remains in a downtrend; no change in the ADX, price/volume, or Elliott Wave.

The ADX directional indicators narrowed last week on a near-term bottom in price. Another week like that and we could see an uptrend signal. The same goes for price/volume. For Elliott Wave, I’ve seen bullish and bearish counts mixed with bull and bear market calls. Bulls say the bottom is in, the recession is priced in, and this rally leads back to new highs. Bears say the rally is bull trap, short-covering, etc. before the next sell-off begins. 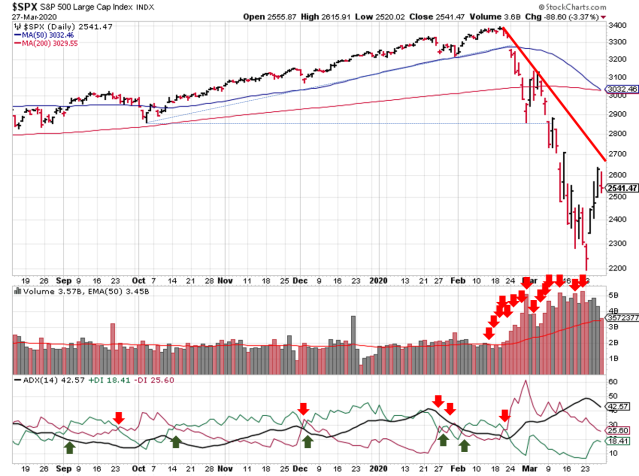 Technically speaking, the S&P500 ($SPX) sits ~16% below the 50 and 200 day moving average, which are about to cross-over.  First things first, the S&P will need to break through the current downward trendline. The index also put in a potential rally start on Tuesday, so we’ll be looking for a follow-through day starting this week. That said, severe market corrections like this one aren’t kind to the first rally attempt; most fail.

Longer term, you can see how far and fast prices fell, and where we are in relation to the 2016 low.

From an economic standpoint, last week was extraordinary.

And through it all, U.S. stocks saw their best week in 11 years, posting back-to-back up days for the first time in over a month! We were overdue for a rally of some kind…after such a steep correction, every kind of investor, big or small, needed to make adjustments.

But before we get carried away, remember that stocks are essentially “fair value” right now. We’re about 25% below the February peak, and stock prices are basically “even” from a valuation perspective. It’s from that starting point that we head into earnings season. And some firms are already withdrawing their earnings guidance for the year, making it even hard to figure out the right price going forward. Wall street analysts will do their best, but at this point, we’re all just speculators.

In my opinion, the bottom is NOT in. I don’t know how long or how high the rally will go.  I do know that people are being hit in paycheck, whether that’s from lay-offs, reduced hours, pay cuts, or even super low interest rates, bond yields, and dividend cuts. Quarantines, shutdowns, shelter in place, and social distancing measures are changing spending habits, at least in the near term. We’ll see more businesses close their doors; some temporarily, others for good. Unemployment will continue to climb, as well as the number of people fighting through the virus. All these things will impact valuation for at least the next 2 quarters, if not longer.

Despite the political games, I’m encouraged by the steps taken last week. To summarize, in the U.S., the government has created a giant cushion for the economy to land on. Some people have parachutes and are not concerned. Some will land in the middle, some will land on the edges, and some will miss it entirely. How quickly we get back on the mend depends on how quickly we can help those who weren’t cushioned well.

So…as far as safe investing goes: income stocks are starting to look attractive by several measures, so update your watch list and watch those buy points.  For growth stocks, it’s been 6 weeks since the sell-off began, and that’s the minimum for building a proper price pattern.  Expect volatility to continue; I’ve seen some stocks fall past my theoretical stops (7-8%) in a day. Swing trading or momentum indicators are probably your best bet.

Someone asked me what the world will look like when this is all over.  I told her that I didn’t know what it will look like, but surely “cobra chickens” will have taken over.

Hats off and a big thank you to the brave men and women putting their health at risk in essential positions to keep the rest of us safe and healthy during this crisis.

Best to your week!