ANALYSIS
The stock market outlook shows the S&P500 in a downtrend to start off October.

ADX and price volume are bearish, and look a lot like they did during the first week or two of May.

Elliott Wave shows 3-waves down (so far).  When the SPX dropped below the June low, the uptrend possibility went with it.

The long term view of Elliott Wave needed an update, and what better time then the start of Q4.

I still favor the Double Three Pattern, as the weekly view continues to line up really well. We don’t know if the first leg down is 3 or 5 waves. In both cases, we’re due for a bounce.

If we get three waves down, another double three pattern is possible (3 waves, 3 waves, then 5 waves), and would likely produce the “shortest” bear market of the wave counts I’m tracking. We’ll see a bounce shortly, in the form of a new, 3-wave uptrend back towards to the 200-day.

If the first leg down is 5 waves, then the zigzag pattern above is likely (5 waves, 3 waves, then 5 waves). 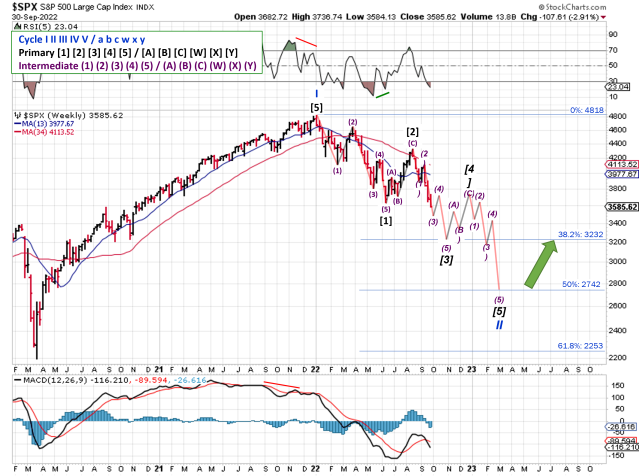 It’s also possible that the whole correct is just a regular 5-wave corrective pattern.  From here on out, that pattern isn’t much different than the Double three with a zigzag in terms of inflation points and support/resistance levels.

COMMENTARY
Last week’s call for volatility didn’t disappoint.  Although I don’t think anyone was expecting a near collapse of U.K. pension funds!

We also saw some interventions in currency markets by the central banks of Japan and China.  Not as unexpected, but still volatility inducing.

Q3 earnings are starting to roll in, and the news so far is “not good”.  Many firms, especially retail, are sitting on too much inventory.  Even firms like Nike ($NKE) struggled, and they are typically on top of such things.

More worrisome are the increasing number of downward earnings revisions and outright misses.  It’s true that there’s a lot of bearish sentiment and most types of investment instruments are oversold levels.  It’s not true that too much negativity means stocks can only go up.

Long-term prices are based on forward looking earnings.  If companies miss on earnings or beat but revise their estimates downward, then their stock is almost immediately “overvalued”, and usually results in a price drop.

Moving on to numbers that aren’t dropping, remember the post a few weeks back mentioning the Fed’s focus on PCE, rather than CPI? Well, PCE came out last week and was higher than expected.  The higher reading wasn’t too surprising, given that CPI also came in higher than expected.  But higher PCE also means a pivot or pause in interest rate hikes is even less likely.  Or, to put it another way, justifying a pivot or pause requires an increasingly “bad” situation to unfold.

Almost on cue, the scuttlebutt this weekend was that a major financial institution is in serious financial trouble due to recent interest rate and currency swings.  If I had to guess, I’d go with Credit Suisse based on their widening credit spreads; not quite as high as 2008, but it’s not 2008 either.  Hopefully the rumors turn out to be false, but they’re not the type of thing you hear at the start of a new bull market or big rally either.

Best To Your Week!

P.S. If you find this research helpful, please tell a friend.   If you don’t, tell an enemy.

Invest Safely, LLC is an independent investment research and online financial media company.  Use of Invest Safely, LLC and any other products available through invest-safely.com is subject to our Terms of Service and Privacy Policy.

Not a recommendation to buy or sell any security.