ANALYSIS
The stock market outlook remains in a downtrend, as we await confirmation of a new rally.  The S&P500 ($SPX) tried to break a bearish trendline last week, but was unable to do so.

The ADX shows that downtrend strength peaked last week.  That’s good news for bullish investors, even though the signal remains in a downtrend. 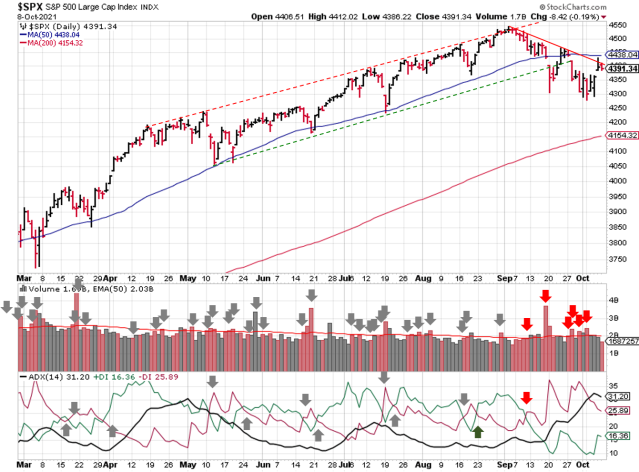 From a price and volume perspective, the signal remains mixed.  The S&P picked up another distribution day last week, and price remains below the 50-day moving average.

The total count of distribution days stands at 6, which is a bit elevated, but not too severe.  Of more concern is the cluster of 4 showing high levels of institutional selling the last week of September.  Since we’re testing the bearish trendline again, another burst of high volume selling would indicate the correction isn’t over.

SPX Technical Analysis Chart for the Week of October 10 2021

For Elliott Wave, the ABC corrective pattern appears to be complete, and along with it Intermediate (4).   The technical indicators support this hypothesis; a positive divergence** in the RSI  and a cross-over of the MACD histogram (both circled in green).

I’m watching for a break above the Wave B high or a test of the Wave C low before a signal change.  If the correction is over, the S&P won’t drop below that low, and the S&P500 has moved into Intermediate (5), which could last ~5 months if it mirrors Intermediate (1).

**A positive divergence is a higher low on the RSI, with a corresponding lower low in price, which suggests that traders weren’t as eager to sell at the lower price level.

COMMENTARY
Commodities, particularly energy, are in the news lately, as the price of oil, natural gas, and coal rocket higher. But if you take a peak below the surface, these trends have been in a place for a while…they just haven’t been dramatic enough to reach headline status! 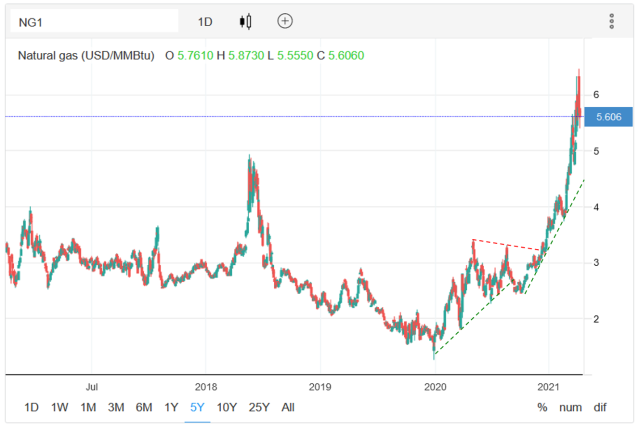 In the case of natural gas, the price began trending higher back in June of 2020, and really began accelerating in June of this year.

Likewise, coal began it’s uptrend early in 2020, but really began moving in September of that year. The move over the past two months looks like a blow-off top. The move in coal could be over, and you’re just hearing about it now.

Obviously, neither of these trends are sustainable. But both of them highlight the need to do your own research, rather than wait for headline news.  There’s a reason traders say “Buy the rumor, sell the news”.

On the political front, the U.S. Congress agreed to a temporary deal that raises the debt ceiling and avoiding default. The next round of posturing will pickup again in a month or so. It’s hard to know what the next Fed meeting will bring; will they or won’t they begin to taper their quantitative easing. Inflation is running hot, while labor shortages and supply chain issues continue to stress the economy.

And lets not overlook the recent sabre rattling in the sky over Taiwan. A small misstep could have global implications and render most of our current narrative moot.

10 weeks until Christmas! Given the current environment, now might be a great time to start shopping!

Invest Safely, LLC is an independent investment research and online financial media company.  Use of Invest Safely, LLC and any other products available through invest-safely.com are subject to our Terms of Service and Privacy Policy. Not a recommendation to buy or sell any security.