ANALYSIS
The stock market outlook remains in an uptrend, but that doesn’t mean we can’t see corrective price action.

The S&P500 ($SPX) continues to trade within the upward price channel, but you can plainly see the increase in volatility and recent weakness.

The ADX signal maintains the downtrend signal based on the directional indicators, and a weak trend based on the ADX itself.

From a price and volume perspective, the signal is mixed to start the week. Friday’s distribution day has an asterisk, due to the extra trading volumes from option expiration. But even with that distribution day, the total over the past 5 weeks remains low (5).

However, price closed below the 50-day moving average for the first time since June, resulting in the mixed signal. That said, the S&P sits ~4 points below the 50, which is roughly .075%. Let’s see what happens this week.

For Elliott Wave, the S&P500 is clearly correcting, but what’s not so clear is whether it’s within an uptrend or the start of a downtrend. So the signal remains mixed.

The RSI(5) pattern didn’t hold up, and neither did the 34-day moving average, indicating a change in market behavior. On the positive side, the RSI shows a positive divergence, so the S&P may be close to bottoming. At the moment, I think we’re still in the 5th Intermediate Wave…probably the 3 minor wave…more to come.

COMMENTARY
The latest CPI report showed inflation moderating in August, as expected. This is the “transitory” aspect everyone is talking about. But this is on the heels of higher PPI numbers (meaning higher prices are still being felt in the supply chain). How much of that increase makes its way to the consumer remains to be seen. 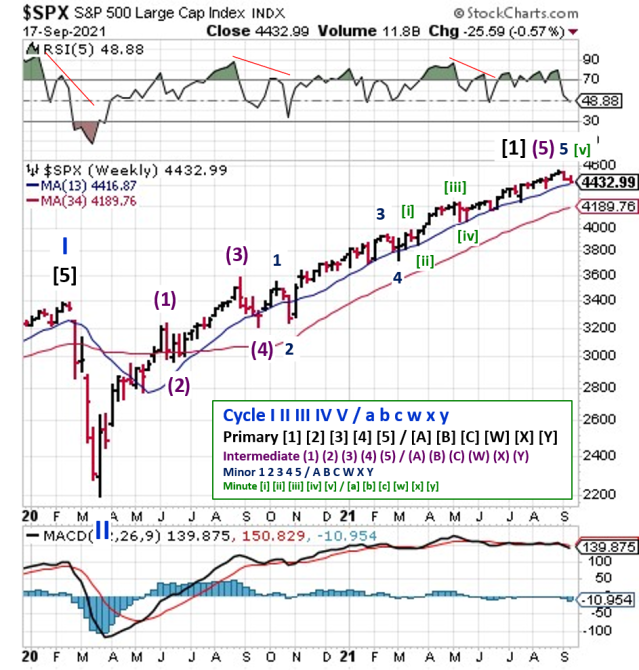 If the original count for the “minute” waves was correct, then it’s likely that the Primary 1 just ended, and we’re in first impulse wave of the Primary 2 downtrend. There’s nothing “wrong” with the overall structure of the waves, with the Primary 1 lasting about the same amount of time as the last Cycle 1, Primary 1 (~1.5 years). And the intermediate, major, and minute waves all show long, 5th-wave extensions.

I’ve seen some counts putting the S&P at the end of Primary 3, which would also put us in the first impulse wave of a downtrend; this time a Primary 4. The overall wave structure looks ok in terms of overlaps, but the timing and symmetry of the intermediate waves looks off. And the Primary 1 is too short when compared to the Cycle 1, Primary 1 back in 2009-2011. 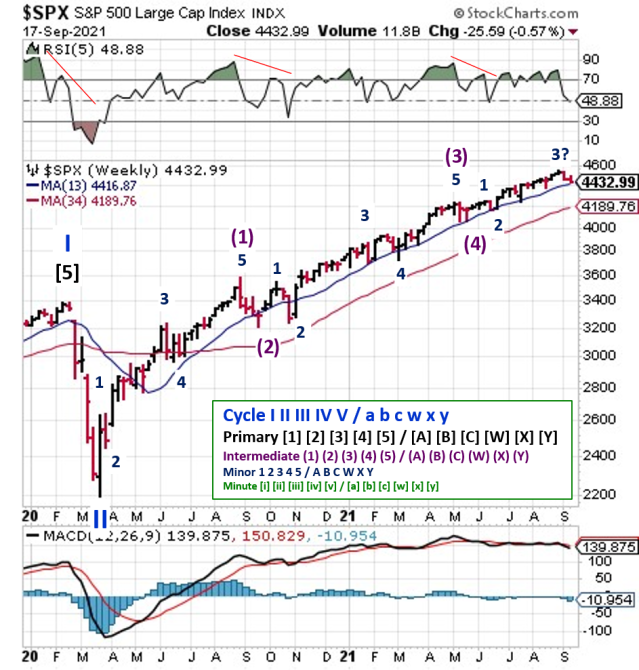 If we use the overall structure from Case 2, and take it down a notch, in terms of wave type, the count puts the S&P500 in a minor 4 within the Intermediate 5. The RSI behavior matches up with minor/intermediate wave combinations better than intermediate/primary wave combinations. And the counts are more symmetrical. I still need to work with the first and second waves a bit, but you get the picture.

I know September and October are historically bad months, but a Primary 2 has the potential to take us back towards the Cycle 2 low back in March 2020. That’s somewhere between 3050 and 2200…which means a 30 to 50% bear market. I don’t see Case 1 as a likely option given the current financial environment…let’s put that at 25% probability.

Case 2 would put the S&P500 into a big correction, with a lower bound near 3600 (~19% from last week’s close). Given the financial backdrop at the moment, that seems more plausible than a 30-50% drop, but I think we’ll need to start raising rates, see sustained inflation, and earnings misses before that happens. Plus, the technical indicators (RSI and MACD) don’t appear to support the end of a primary wave. Again, I don’t see this as a likely option either, so call it a 25% chance.

Case 3 seems most probable at the moment. Additional downside from the current correction would be limited compared to Cases 1 and 2. I put the probability on Case 3 around 50%.