The S&P500 ($SPX) bounced off the 50-day moving average last week and rallied back to all time highs.

The ADX directional indicators flipped on Monday. The ADX line itself remains far below 20, A few more distribution days dropped off the count, putting the total at 5 and 3 of those will drop off at the end of this week. Combined with a solid rally off the 50-day, the price/volume signal also returns to an uptrend.

The S&P made quick work of the question about counts from last week, eliminating the possibility of a completed 5th wave and reaching a new, all-time high.

COMMENTARY
A lot of positive news on the political and economic front continues to support a “buy the dip” mentality.

The Federal Reserve announced that large banks had all passed the annual “stress test”, meaning they are free to restart dividend and/or share repurchase programs.

The Biden administration also reached an agreement on an infrastructure deal, covering ~25% of the “New Jobs Plan”. Let’s face it: any agreement is a positive step in what passes for political negotiations these days. But major market-impacting issues like corporate tax rates remain up in the air.

Corporate credit spreads (the difference in yield between corporate debt and government bonds) hit their lowest level since 2008! Typically, spreads will widen sharply (referred to as a blowout) prior to any sharp decline in the stock market. Then again, government bonds don’t yield that much in the first place, so the bar is pretty low at this point.

And lets not forget that record low interest rates also allow market participants to use margin more cheaply than ever before…which they are happy to do, and is a great enabler for the current bull market. 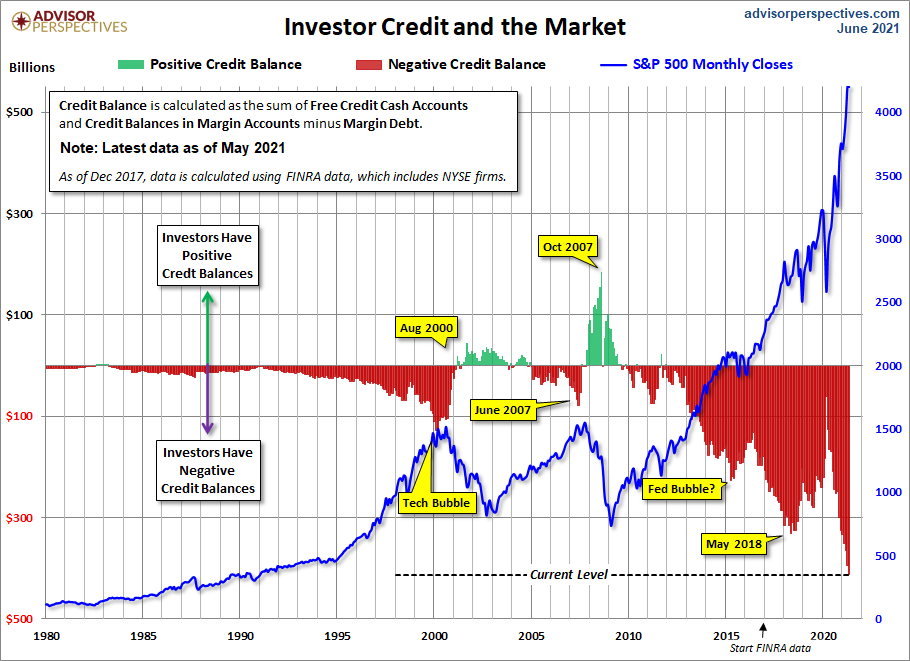 So it seems like a majority market participants have decided no one wants to “sell the news”.  Just remember that markets drop much faster than they rise, so the next major sell-off may feel more like a bungee-jump rather than an elevator ride.