COMMENTARY
A quick glance at the charts shows that most of the indexes have been in a shallow decline since early March.  The signs of selling are present, but not at high enough levels to change the outlook.  My hypothesis?  The shallow price declines indicate measured selling, as institutional investors slowly rotate sectors (most recently into the technology sector, as measured by the NASDAQ).  By the time a moving average or distribution day criteria is met, these investors have begun moving back in.

Last week still wasn’t great for a majority of the indexes from a moving average perspective.  After finding support the prior week, the NYSE and Russell 2000 ended last week below their 20 and 50 day moving averages.  The S&P500 and Dow Jones closed below their 20 day, but above their 50 day. And the Nasdaq continues to lead US markets, closing above both the 20 and 50 day moving averages.  Ideally, the Russell 2000 would lead the market higher, as it is composed of small cap stocks, which tend to be growth oriented. 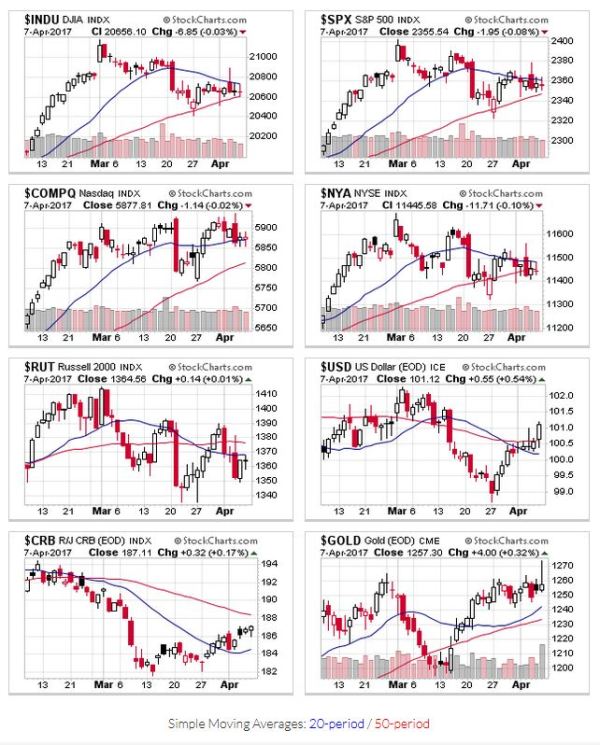 Price and volume action remains a cause for concern, with high-volume selling days elevated, but not yet extreme.

OEW uptrend signal remains in place, but the weekly post points out that price action over the past few weeks actually meets the technical definition of a downtrend (lower lows and lower highs).   As far as signal generation, OEW observed the following:

“When OEW signals a downtrend confirmed, it is likely that the correction will be nearly over. This kind of activity has happened quite often in the past 8 years”

This is the same phenomenon discussed in the 2016 performance review…most of the signals were generated at the tail end of a correction or downtrend.  That said, be on the lookout for market weakness; derailing a “recovery” doesn’t take much selling activity.

If you find this research helpful, please tell a friend. I share articles and other news of interest via Twitter; you can follow me @investsafely. The weekly market outlook is also posted on Facebook and Linkedin.

You can check out how well (or poorly) the outlook has tracked the market using past performance estimates:

For the detailed Elliott Wave Analysis, go to the ELLIOTT WAVE lives on by Tony Caldaro.  Charts provided courtesy of stockcharts.com.